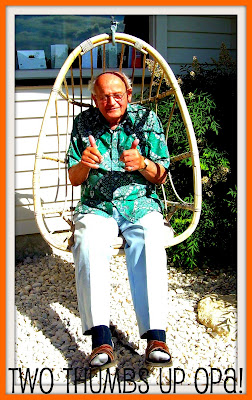 It's been so good just lazing around while listening to all the stories told about M's Dad and my first-ever human OPA who sadly passed away last week. It's really hard to fathom just how much happened in his life it was just so interesting and a real adventure.

Even though it's only words I'm listening to I could just as easily be sitting in a movie theatre watching his life unfold on the big screen. Secretly I'd really like it if that ever became a reality I'm sure I'd be a shoe-in to nab the star-cat role.

Today I feel a little more at peace coz I know that OPA wouldn't like this rainy day and would prefer his new spot of being reunited with his family while taking his long eternal nap in the sky. I'm guessing too his old neighbourhood cats from back in the old country, Holland will be super pleased to see him again.

Now as you all probably know my adopted country is Noo-Ziland but part of my blood runs orange from M's Mum and Dad's home country of Holland. Orange is the country's official colour which works for me as I don't mind saying orange really is my colour. I wear it well.

M's Mum and Dad along with her older sister immigrated way back in the late 1950's. It's so incredibly hard for me to get my head around this as I can only imagine how difficult it must have been for a young married couple to make such massive decision. On top of this they all spent 6 weeks at sea on a big huge boat with little more than a couple of suitcases and a few hundred dollars.

Just the thought of spending that long on the water makes me feel all soggy.

But for M's Dad (my OPA) it was heart-wrenching to leave but he had a vision of a new life for his young family without the threat of war, cold, hunger, hardship and the blurred vision of a brighter future. Leaving for Noo-Ziland offered him more than just a glimpse of hope.

It was so tough to leave. As much as the families understood the need to start a-fresh the heart strings played a different tune and it was only natural that their families wanted them to stay home, where they belong in the country of their birth not in some far off land at the bottom of the world.

M's Dad left behind a huge family and a way of life that had become so familiar to him. As the youngest of 16 brothers and sisters I can only imagine how tough it was to grow up in such poor conditions with the whole family living in a really small house while war time Europe raged.

I've heard too that his house had only one tap! This one and only watering station serviced everyone's bathing needs, kitchen requirements and all the other things that we take for granted from our taps. But there was no complaining as to them having only one tap was well normal.

It was incredibly tough to get by when war and hardship was your everyday reality. Against his wishes OPA had no choice but to leave school at such an early age to go out and work, on top of this he had to leave home too. There just wasn't enough food for the whole family and moving out of the house to the safety of a provincial farm kept him safe from all of the war time threats.

All the while his Mum was worried sick after her little boy.

Every time I hear this story my heart breaks a little. I mean I have it so easy, I get up eat friskies, nap, eat some more, explore outside, sleep then do it all again. I can't imagine being so cold, scared, hungry and homesick.

Yet something resonates with what M told me just the other day. Before her Dad passed away he said "we were so very very poor but you know what we had smarts and this is what got us through". Smarts and family love. If only we could bottle that up and sell it I'm sure it would fly off the shelves.

So when it was time to leave Holland Dad took with him a suitcase full of memories and Dutch pride. He never forgot who he was, where he came from and how precious his family was to him. I did sense a sadness and I could see it in his eyes that he mourned for a childhood lost. He never got to be just that little boy playing and running around with his mates. He never got to be a kid.

Immigrating to Noo-Zilind was like opening a new book with Chapter One revealing the start of their journey within this new country. Over the years Dad's value system and high regard for work and family brought him so many riches a beautiful wife, four healthy children, his own painting and decorating business and his very own home, a splendid weatherboard 1920's villa which he lovingly restored.

All this was such a far-cry from the home with the one tap and the harsh cold winters.

Yet "being Dutch" never left him. Madly passionate about soccer he never quite grasped cricket or rugby, his diet was often an assortment of pickled fish; herring and rollmops, everyday he'd take a droppie that's black salt liquorice and his meals weren't complete without a helping of potatoes either boiled, mashed or fried. I tell you if there was a "Certificate in Potato Peeling" OPA would have one with honours!

Oh and I should mention here too that M told me stories about how there was always plenty of wooden clogs in the garage! Yep the family used to wear them for all sorts of outside jobs.

Before I sign off anipals sometimes took centre stage too. Both M and her Mum are mad about 4-legged pals and boy could OPA make a big song and dance about how the cat was getting more attention than him. To me I can't quite understand what all the fuss is about, isn't the natural order Cats first, Dads, husbands, OPA's second?!


I won't get into all the cats the family loved over the years as I'm still quite traumatised by the Bam Bam story. From what I can gather this big red Tom cat left behind a lot of scars, literally, before defecting to the neighbours house.

Writing this makes me feel slightly green with envy as it was a d-o-g that stole OPA's heart, Lady a stunning Red Irish Setter without going into too much details I've seen a few photo's and even I'll admit Lady was one good looking d-o-g.

I guess we can all take comfort that when life takes someone precious away from you thank goodness you always remain connected through memories, all the stories and the photo albums you've shelved in your mind to pull out on a rainy day. Now that comforts my little heart.

I hope they have friskies where you are OPA, lots of love Minnie Moo
Posted by Minnie Moo at 13:40