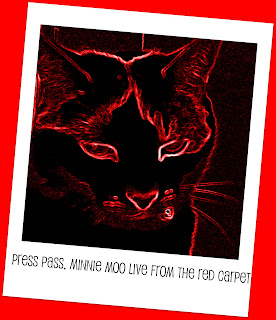 I'm so excited instead of doing my usual thing of lazing around I'm actually going to do something really useful with my time. Being lazy on the couch while watching the Golden Globes live from the red carpet with Ryan Seacrest and Guiliana Rancic.

In one of my blogs I did say that I'm not really a "fashionista" it's just that my I don't seem to wear anything but white, black, gray with a hint of tan. My new friend Lucky has more style but she's out on a shopping spree. So it's just me blogging my way down the fabulous fashionable red carpet. I'm bound to make the odd faux-paw. But hey remember I'm a cat.

So here's me thinking what am I going to say about the first dress and what's the first thing I see a d-o-g! I mean I thought this red carpet was for bonafide peeps. Even I'm going to say, oh-so-super cute complete with his little bow tie I think he must have a day job as one of those anipal movie stars. Wow now that's a cool, it's got me thinking perhaps there's an opening for a me, a c-actor all the way from Noo-Zilind.

I've got to say here Guiliana Rancic looks so faboosh in her beautiful blush tone Monique frock. I was knocked out too by her first Basil Soda dress. Oh the black and gray tones with the feminine ruffles. Definitely a G for Gorgeous.

I don't know how G manages all that multi-tasking looking beautiful while asking her showbizzy questions and, trying not to faint when GC walks by.

I know I shouldn't bark on about it but hey I'm still jealous there was a d-o-g on the red carpet!

Jessie Tyler Ferguson from Modern Family is chatting with Ryan now I love his quirky waistcoat but hey I couldn't help but overhear him say something about a d-o-g called Leaf, he's a (non porky) Morkie. I'll say no more only that is this a celebration of film and television or 4-legged mutts?!

I know I'm boy-cat but hey I totally get that swooning over George Clooney thing. When he stepped out of the limo my heart did somersaults and skipped a couple of beats. One word WOW. Ok M can I have the keyboard back now please? His girlfriend Stacey looks kind of good in her red dress but hey it is really hard to pull off wearing a red dress on the red carpet, you know you just tend to blend in.

Now I don't want to change track here but there's a theme here you see I read in People Magazine that even George has a rescue dog apparently they both bonded over Turkey or something like that.

Hey M do you think I could trade-up? George are you looking for a cat to love too? I mean I'll even stoop to be your DPA (d-o-g personal assistant). I can't promise the d-o-g won't end in tears but hey anything to get my foot in the door.

Pick up my tiny little cat mouth off the floor please! I mean Charlize Theron is stunningly-licious. Just straight to the top of the best dress list. A for her Amazingly beautiful dusty-pink or should I say blush tone Dior Couture creation with the Cartier jewels. True glamour.

Woo-hoo there's a cat up there talking to Ryan! It's Salma Hayek from Puss 'n Boots my second favourite movie after Garfield. Now I quite like her Gucci dress but the metallic bits and pieces, there's just too much going on. It's like a metal-super-power-shield emblazoned across her chest. I think perhaps she should have worn her Kitty Softpaws outfit instead.

How did Ryan Seacrest manage it? He's talking to Brad Pitt and Angelina Jolie! It's good to see the ice seems to have thawed between Ange (can I call her that?) and Ryan. Ange's movie "In the land of Milk and Honey" sounds super intelligent and would probably go right over my head. But hey I do like Milk and Honey does that count?

Ok back on topic. Wow my fashion radar is just buzzing! How can you not love Angie's Atelier Versace dress with the red folded accent across the top. It's understated yet still screams-sophistication sewed in with effortless-elegance.

Warning! Wardrobe malfunction! Sarah Hyland's zipper broke on the red carpet. At least she has a whole Modern Family to help sew her right back into her vintage Dolce Gabbana gown. I always watch Modern Family it makes me MOL (meeow out loud). Hey come to think of it I've never seen a cat on Modern Family....what do you think "Modern Family starring Minnie Moo?"

Boy I think there's so much opportunity for me in Hollywood. Now how do I get there?

One of the hottest trends swimming up the red carpet is the Mermaid Tail. Hmm sounds a little fishy to me what's wrong with a cat tail.

Ok this is a little odd for me to write but Diana Agron from Glee is wearing a gown inspired by laser cut swans. Too weird, just too complicated to describe so I'll be moving right along to Lea Michelle's Marchesa Frock wow no not for me. Just too much of a metallic mesh, it's like wearing a shattered mirror. Plus the hair isn't right. Normally Lea's on the fashion money, today she's following the latest economic trend. A downgrade. Ouch!

Her Majesty Madonna is in Ryan's presence. Does he have to curtsy? It's amazing how she looks so beautiful and timeless. I'm not going to say anything more here. Other than it takes a lot of work. The Metallic gown look is just not for me and it kind of washes Madge out.

Now on the flip side her W.E actress Andrea Ridenborough looks positively regal in her Vivienne Westwood gown. Wow now this dress is so wide you could just take time out and rest your arms. How clever to one day wake up and think "you know what I'm going to make a dress with your own personal built in arm rests".

Oh before I forget I must say Reese Witherspoon's blonde hair looks fab I feel a pang of curl envy. Do you think one of those Hollywood hair stylist peeps could fly over to blow dry a curl into my hair too.

Jessica Alba funny I still get her confused with Jessica Rabbit but the real Jessica Alba looks really classically pretty in her very detailed Gucci dress. Too much detail for me, I'd like to say there's tons of beads and stuff sewn on but that sounds like a dress right from the arts and crafts market. Not everyone can pull off this look without looking, now how do I say this delicately, old.

Oh and a big cat-hug to Elle MacPherson in her wonderful whimsical Zac Posen frock. Love. Not OTT but just right. She said her favourite bit of her is her heart. Bless. I think my heart is pretty special too.