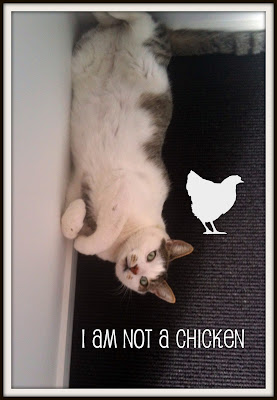 Mr Tuxedo wasn't fazed at all about wearing his Elizabethan cone. He simply just got on with his life as if it wasn’t there. It had to be annoying though to have an inverted looking lampshade around your head but, other than not being able to scratch, for Mr T, it was business as usual.

So the other morning I woke up after a long-delicious sleep and slunk off the couch just before those pesky birds chirped their way through the dawn chorus. Stretching and walking at the same time I woke up a few peeps along the way before heading to my dining mat for a hearty breakfast of crunchy friskies. Luckily thanks to me M was awake too and even though it was early she happily opened the door for me (so not true), ah fresh morning air there's nothing like it.

Wandering outside I made my way down our little road and towards the wooden fence line skirting the edges of the nearby hilly paddock. As it was super early, I was quite taken aback to see a lone figure sitting atop a fence post. There sat Mr T against the backdrop of morning mist looking all lonely but wise. If he hadn’t been a cat I would’ve said of Mr T, “he wore a face of a wise old owl.”

Sitting on the grass verge on the road side of the fence I said in a loud voice, just in case the cone muffled his hearing, “Good Morning why are you sitting all by yourself on top of a fence post?”

Fearing I'd jinx him I didn’t say anything about his collar being so wide he might soon loose his balance and plop right off his post.

Half expecting him to “hoot hoot” instead, he went on to say, “well Minnie Moo obviously I’m all by myself as you can see there’s only room for one on this post. But more importantly I’m on look-out patrol. You see I’ve got this eerie feeling that a menacing Hawk lives in that cluster of tall trees over there and is just waiting to fly out and pluck lunch right from under our eyes.”

As you're probably aware I have huge issues with any member of the Hawk family. This fear goes way back to when I was living down the road and round a few corners in Kingsgate. I actually believed our ceiling fan was a Hawk and the lounge absolutely terrified me. The mere mention of the H word electrifies the hairs on my back.

“Do you want to walk with me over towards the trees to warn the bunny rabbits and any other little animals?” Thinking to myself, “ what are you kidding me? No way, no, absolutely not! Even if it meant free friskies for a year I still don’t want to do that!” Then the the strangest thing happened to me. For a brief moment I felt like a chicken. This feeling was followed by words flashing and blinking in imaginary neon lights right before my very eyes, "what happened to the new 2012 Minnie Moo, the super cat all flush with new found confidence?”

Ok so choosing confidence over chicken I said “Look Mr T, I’ve got a confession, when it comes to Hawks I’m a chicken. This crippling fear creeps all over me causing me to feel deathly afraid. But I know I can’t let fear rule my life and perhaps this is my opportunity to be brave and bigger than fear. So as long as you’re brave too I’ll come with you on this adventure.”

Little did I know what I was getting into. Thinking back it was as if Mr T's cone was a beacon of bad things about to happen. In hindsight I should’ve, would’ve, could’ve worn the cone as “the cone of silence.” By staying silent about overcoming my fear I should've gone back home for my mid-morning snack nap.

But you know what they say about should’ve, would’ve, could’ve! It was too late I was on my way to conquer my fears with a tuxedo-cone-wearing cat leading the way. Would we return? Troubled or triumphant?

Yours in thank goodness I ate friskies for breakfast Minnie Moo