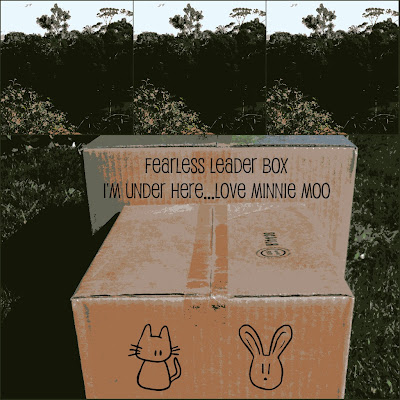 It was mission time but before I got under the box with Mr T and Mayor Thumper I turned around to see just how long the box congo line stretched. Wow! it went for miles upon miles, well maybe at least the length of two football fields, three basketball courts and four lengths of an Olympic size swimming pool. I knew all the sizes from watching sport on the telly.

Squinting into the distance I saw loads of little boxes and heard the muffled sounds of the anipals chatting excitedly under their boxes. Judging by the high pitch squeals everyone was anxious to get our Hawk mission show on the road.

Right I thought, as their fearless leader I really should send a motivating message but with the line so long it was going to be impossible for everyone to hear me and where was a megaphone when I needed one? Thinking outside the box I knew all the box sides had little air holes, the best way for my message to travel was for us all to play pass the message.

I briefly told Mr T and Mayor Thumper of my plans and all they said was, brilliant! Making my way to the first box I thought about how defining my message would be and thinking of the great cat Mr Churchill I knew they would look to me for strength, guidance and reassurance our box congo line plan would work.

In my clear made for radio voice I spoke through the holes of the first box, “We're ready to go. I’m going to say this message once and then I ask you to repeat it to the box behind you, they will in turn to the same and so on and so on.”

“Always keep your eye on the box in front of you. No over-taking. Please keep quiet. Unless I give the order, do not get out from under your box. When my box stops under the 3rd tree to the left, your box is to stop to the right of the front box. Our goal is to form a large circle around the group of trees. Be brave, be strong. Now pass this message to the box behind you.”

As I walked back to my box I had a sneaky suspicion that by the time the message reached the last box it’d be completely muddled, “Pass the box behind you and also keep your eyes to the front when over-taking. Do not keep quiet and when I give the order get out from under your box. When we reach the 3rd tree to the right stop in front of the left box. Get out and form a large circle around the tree. Be brave and sing a song.”

With Mayor Thumper as our navigator we set off. There were quite a few obstacles to overcome and we all had to take extra care not to stub our paws on the little rocks. It got tricky around the cluster of low-lying bushes. With only the tiniest of a gap between each bush it made it impossible for us to squeeze through we had no option but to take the long way round before dropping down quite a steep hillside to reach the lush flat grassy field of the village green.

After a while I checked-in with Mr T and he admitted to being nervous as to what I was going to say to Mr Hawk and really concerned I’d be so pumped up on courage I'd step out of the box right into the claws of danger.

No way, I reassured him, I'm going to avoid all danger and I've thought long and hard about what I'm going to say, please, believe in me.

Crossing the village green, Mayor Thumper checked in, "another five minutes and we're there." At those words my heart started beating so loudly I thought it was going to beat right out of my chest, but as the leader I had to keep it together. By taking a few deep breaths and thinking of my friskie happy place my mind snapped back to the task at hand.

"Thank you Mayor Thumper can you please give us a one-minute countdown?" Right you are Minnie Moo, actually we're a lot closer than I thought in fact, I better start counting now here we go 60,59,58,57,56,55. For every second my heart skipped a beat 53,51,49,47, thankfully it returned to normal for the last ten seconds. We had reached our destination.

Sitting quietly under our box time passed slowly as we waited for all the anipals to form their protective box circle. Phew I let out a sigh of relief my pass the message plan had worked.

As the circle of anipals settled an eerie calm descended even the crickets stopped chirping. For a few long moments the sound of silence filled the air. Crouching down low between Mr T and Mayor Thumper I whispered "this is the calm before our storm, don’t worry and trust in my plan."

In the blink of an eye everything changed as the threatening sounds of swooshing wings cut through the air and screeching menacing cries of ark, ark, ark pierced like shards of glass through our tiny box holes. After what seemed like an awfully long time the madness hushed but yet a dark shadow lingered in the silence. It was then I knew our moment of truth was sitting on top of our box.

Fancy that a box right under my tree with a landing pad clearly marked  HAWKS LAND HERE and judging by where I'm currently perched it looks like I haven't lost my touch in perfecting the perfect landing. But, this isn't right there's something going on why on earth are there so many boxes circling the trees? As my beady eyes glistened I could smell a little anipal perhaps a rat, no make that a cat and a bunny rabbit.

Shattering the silence I began to peck like an over-worked jackhammer creating a few holes for me to see into the box. Confirming my smelling-suspicion, I screeched, hello, what do we have here, two cats and one very large rabbit. The mere sight had my tummy doing the grumbling dance and my my wasn't the buffet table going to look tasty tonight?

Yours in friskies Minnie Moo
Posted by Minnie Moo at 17:14